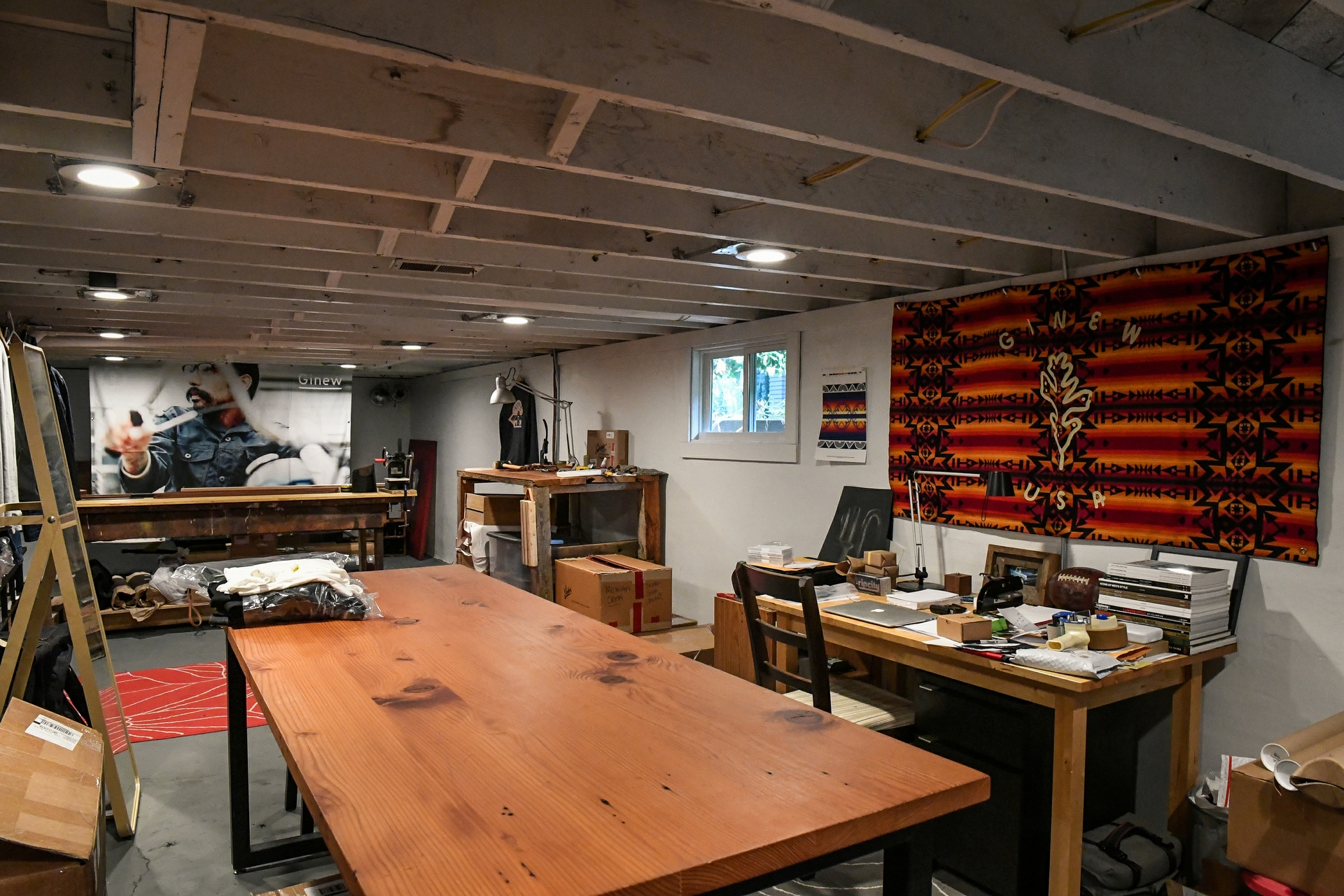 Inside Ginew's workshop. Ginew is the only Native American-owned denim collection in the United States. 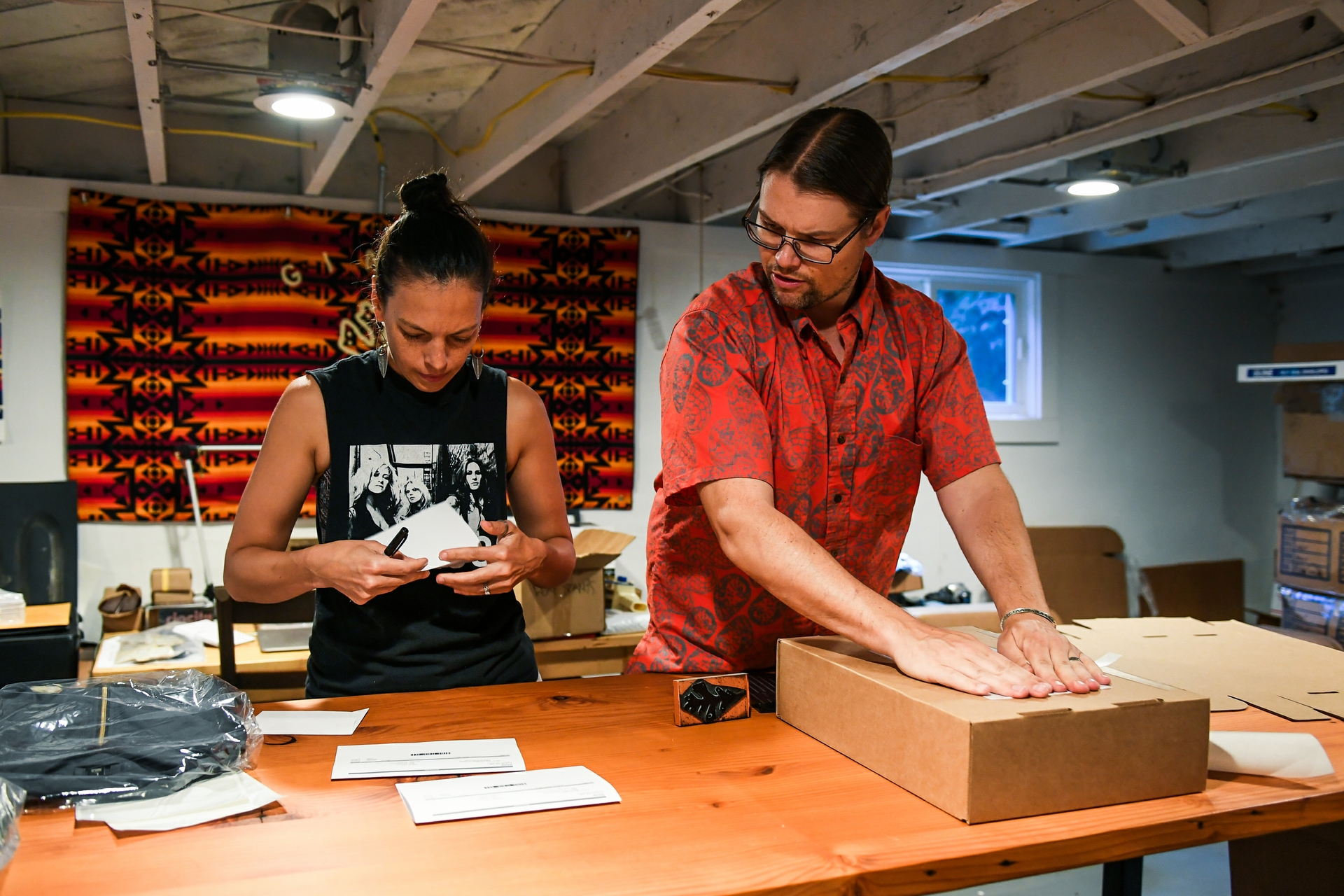 Ginew Owners Erik Brodt and Amanda Bruegl in Their Workspace

Inside Ginew's workshop with owners/founders Erik Brodt and Amanda Bruegl. Ginew is the only Native American-owned denim collection in the United States. 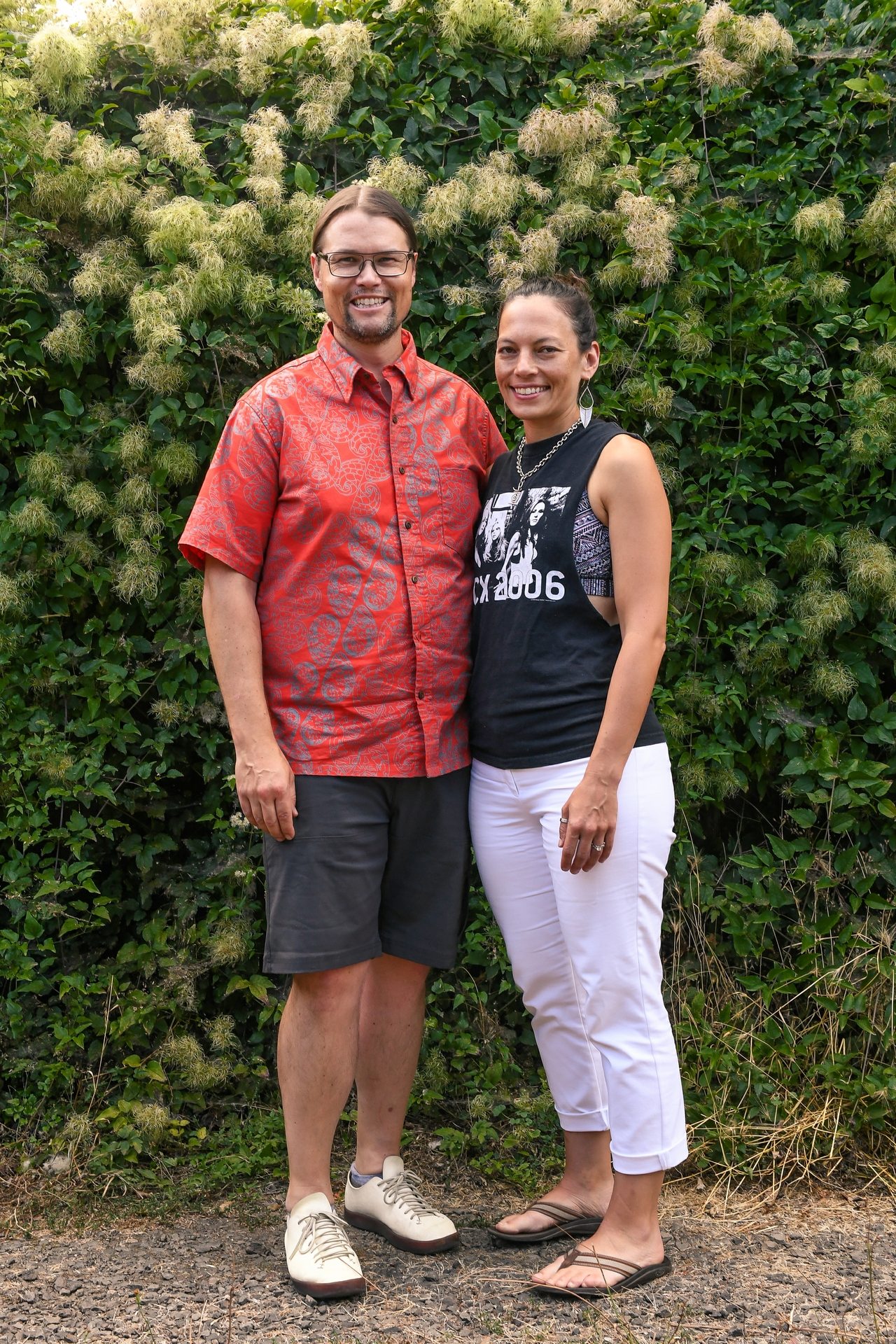 Husband and wife duo Erik Brodt and Amanda Bruegl of Ginew. Ginew is the only Native American-owned denim collection in the United States.

Portland makers, who are doctors by day, use their premium artisan clothing line to tell a Native American story of a different kind.

Since when do doctors moonlight as clothing designers? Since 2010 to be exact. That’s when Portland doctors Erik Brodt and Amanda Bruegl launched Ginew, their artisan-made, workwear-inspired clothing line that has denim-heads drooling over Japanese-milled selvedge jeans and waxed canvas vests lined with custom Pendleton wool.

It’s a side hustle driven by passion, not profits – part of the growing movement toward making durable, timeless, artisan goods that last a lifetime. Plus it gives the married couple a much-needed creative outlet after long days providing care for their patients, as well as researching, mentoring and teaching at Oregon Health Sciences University. But Erik and Amanda say Ginew is also so much more than that. It is, at its core, a way for these two medical professionals to honor their roots.

“I think the statement we’re trying to make is a little more about the visibility of indigenous people in a contemporary context,” says Erik. “I think it’s important that when we go to fashion shows in Asia and Europe people see we’re still here and thriving first-hand, that we have contributions we make to the world.”

Ginew is the only Native American-owned and -designed premium denim brand in the U.S., and each item in their clothing line is subtly imbued — from the lining of the coats to the buttons that fasten them — with symbolism inspired by the Eric and Amanda’s Ojibwe, Oneida, and Mohican roots. Even the name Ginew (pronounced gih-noo) comes from the Ojibwe word for brown eagle and offers layers of meaning.

“Everything has a special element, symbols that are a fusion of Amanda’s tribe and mine, or come from one or the other,” Erik says.

The workwear vibe is intentional too, a nod to the hard-working tradespeople that have populated their families for generations. “When you think of Native Americans you probably think of someone dressed in traditional regalia for a Powwow. But someone who’s American Indian probably wears jeans more in a year than regalia,” says Erik. “We wanted to make items that are more timeless, not so much fashion, worn for multiple seasons and passed on as heirlooms to family members.”

And that’s why they source their material from artisan factories that are still making high-quality fabrics the old-school way. “We’re working with Pendleton. We’re buying from an artisan denim mill in Japan. We’re working with another U.S. mill that does poly cotton twill. They’re all highly trained, highly skilled teams of people. We believe if you put the best materials into something you’ll get a better product.”

Though they launched Ginew in Wisconsin, the couple has found fertile ground in Portland to grow the brand and diversify, branching out beyond premium denim and into more affordable twill jackets and puffy vests this year. “When we moved to Portland, right away we met people who were tremendously helpful and wanted to connect with us instead of isolating themselves as brands,” says Brodt. “It’s so open and collaborative, which was a different feeling immediately.”

Erik and Amanda say they didn’t mean to launch a clothing company. It all started when they decided to make belts for their wedding party from the buffalo Erik’s dad shot for their wedding. “A guy randomly ending up buying an extra one and then we started making leather goods. We just followed the energy when it kept growing.”

It may seem like a surprising side gig for a couple of busy doctors, but there’s one important similarity: Both jobs give Erik and Amanda an important platform for raising the profile of Native Americans. Amanda is one of just two Native American gynecological oncologists in the United States and spends much of her time researching cervical cancer among the native population and running outreach clinics in Salem and at the Confederated Tribes of Warm Springs Health and Wellness Center. Erik is not only a family medicine physician and an assistant professor at OHSU, he’s also the founding director of the Northwest Native American Center of Excellence, which aims to bring more Native Americans into the medical profession.

“People always ask us about our financial goals and that sort of thing,” says Erik, “but Amanda and I talk more about the vision and movement. It’s about the importance and relevance of maintaining indigenous visibility on the global stage so we can’t be put in a box.”

“This is us,” he continues. “We’re utilizing our own symbols, our own traditions, and our own commitment to our Native American culture and incorporating them in our garments. We’re just being who we are.” And in the process, they’re taking control of the narrative of what it means to be Native American, bringing awareness of this culturally rich population with each pair of jeans.