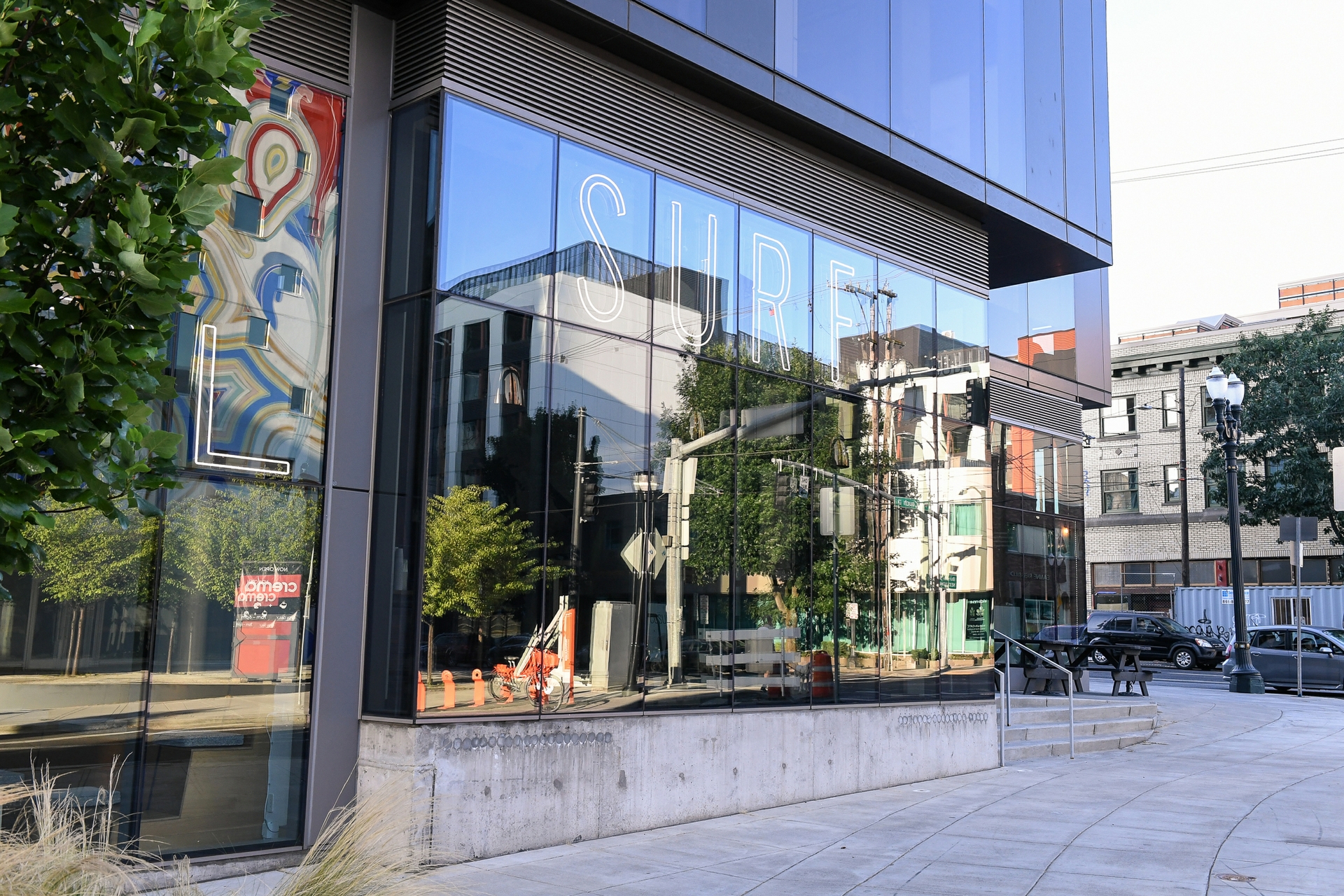 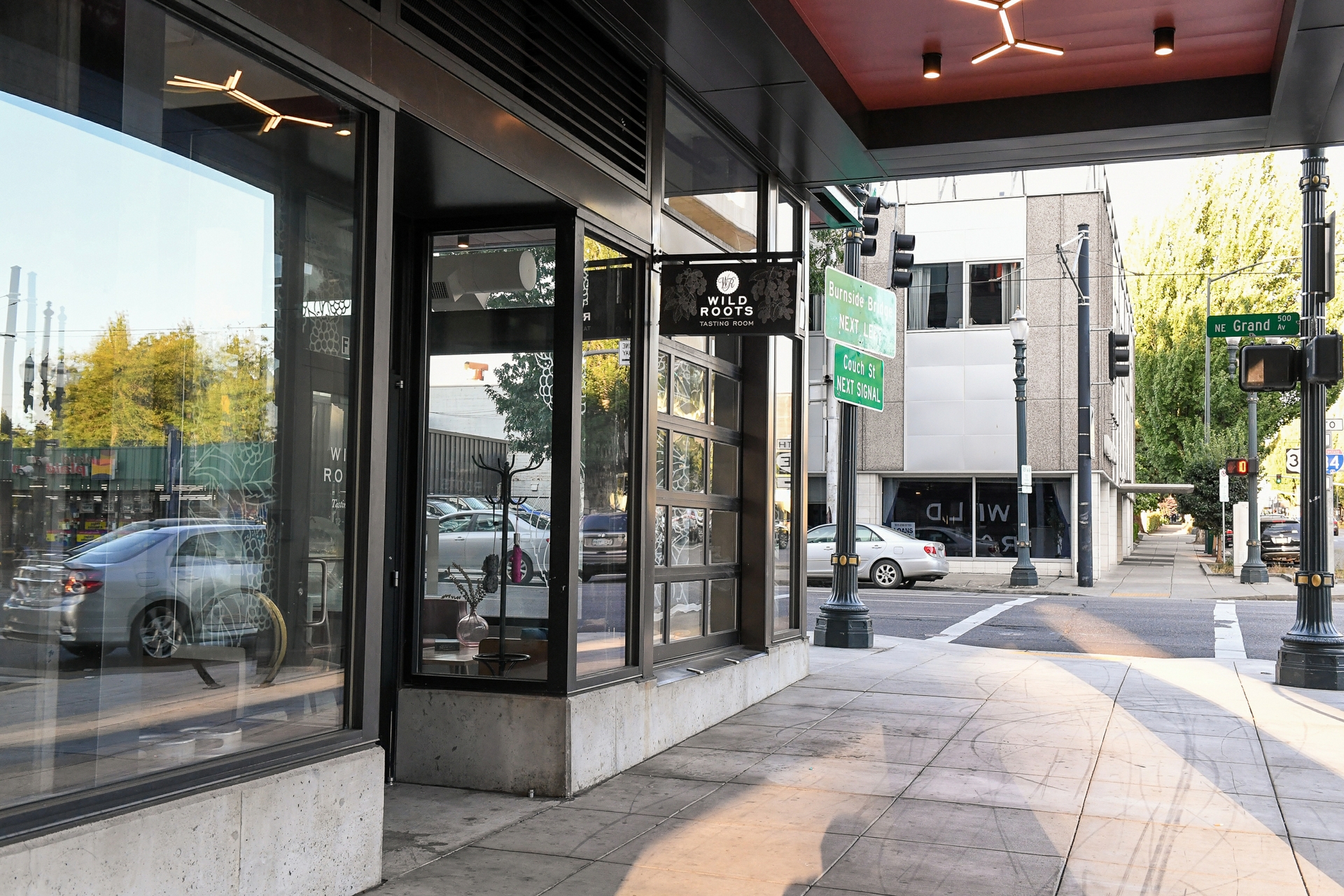 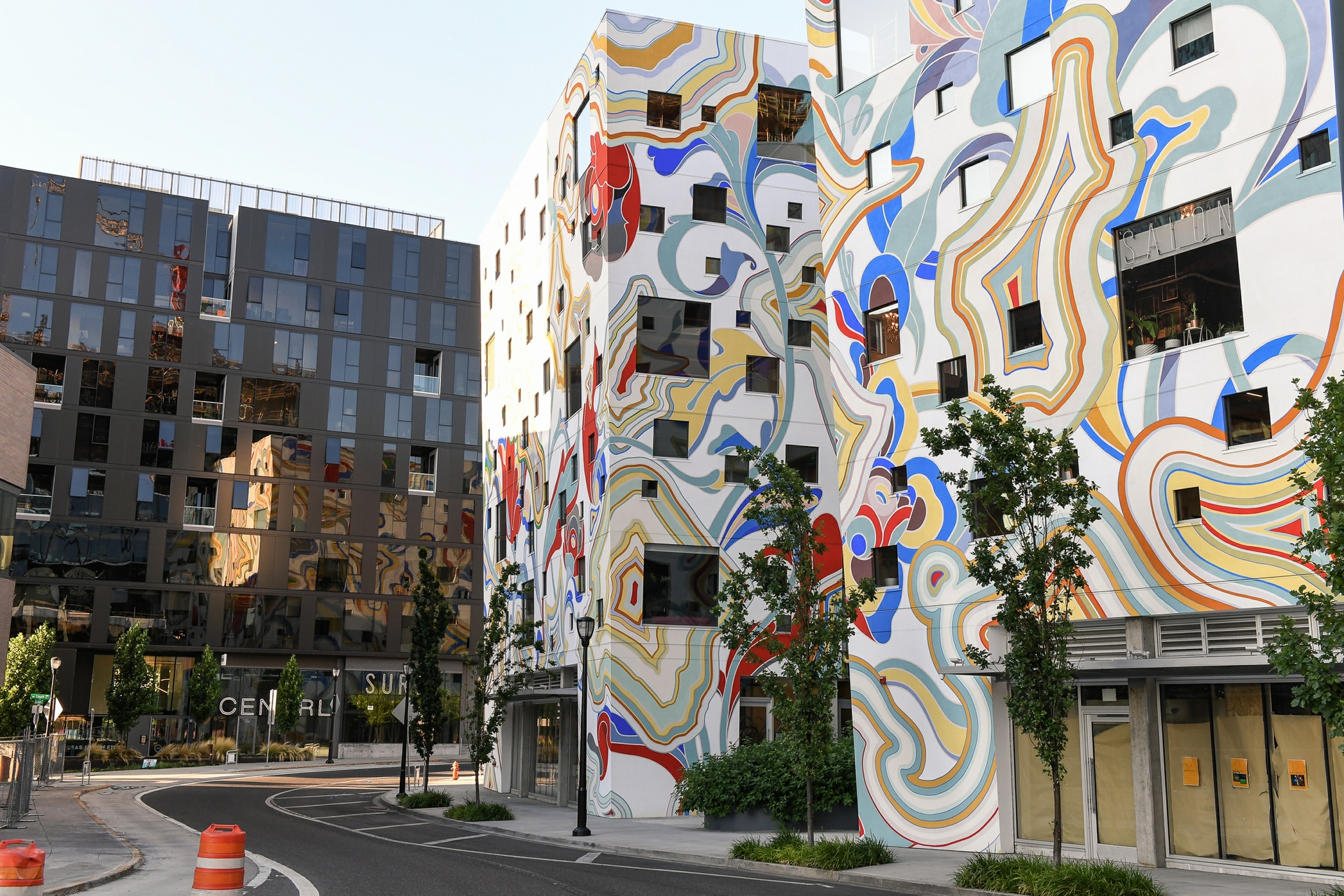 The Fair-haired Dumbell Building on East Burnside. The building was constructed by local architect Kevin Kavanaugh of Guerilla Development, transforming East Burnside into a destination "at the foot of the Burnside Bridge."

One of the most exciting developments is KEX Portland, a “social hotel” slated to open November 2019. Think boutique hotel meets hostel. The joint project by the group behind the hip KEX Iceland hotel in Reykjavik, Green Light Development and restaurant development powerhouse Chefstable, will have both private and shared rooms, a rooftop bar, and a ground-floor restaurant, Dóttir, helmed by Michelin-starred chef Ólafur Ágústsson, who will develop the “New Nordic meets Northwest” menu.

For imports of a more Mediterranean sort, check out the new location of Real Good Food. This cute corner shop helmed by Portland food icon Jim Dixon opened in summer 2019 and offers an array of personally curated ingredients, like olive oils imported directly from small producers in Italy and California, Portuguese sea salts, specialty grains from the south, and spices from all over the world.

Another icon has branched out too. The team behind Le Pigeon, perhaps Portland’s most acclaimed restaurant, opened its casual little sister Canard next door. The all-day café opened in spring 2018 and quickly earned the title of the Oregonian’s restaurant of the year, slinging duck waffles and steam burgers alongside coffee and cocktails from morning until the wee hours.

Just a few blocks away at the Jupiter NEXT hotel, Hey Love is another all-day café that launched in 2018. By day the tropical-themed space is a “Superette” pouring coffee from Aussie-fave Proud Mary with optional CBD-infused caramel sauce, and inventive breakfast salads, bowls and sandwiches. By night it transforms into a cocktail den with slushy, summery drinks sporting island vibes.

Cosube, at the base of the Slate building, offers a more Northwest-focused beach experience. The surf shop/coffee shop opens at 7 a.m. for those heading out to catch the waves at the coast or just heading to work. Rent a surfboard, grab coffee, fuel up with a burrito, or stop by at the end of the day for beer or cocktail. Next door, Wa Kitchen Kuu, sister restaurant to beloved Shigezo Izakaya, serves Japanese lunch and dinners of udon soups, curry plates and fire-roasted rice bowls.

Longtime eastside bakery-cafe Crema recently opened a second outpost in the vibrantly painted Fair-Haired Dumbell building across the street, offering locally roasted coffees alongside some of the best pastries in the city. Nearby, F&B catering opened its newest café in the Eastside Exchange building, bringing an assortment of breakfast and lunch salads and sandwiches to eat in or grab and go.

For those craving a big juicy burger or maybe a slice of pie, Tilt Burger opened its third location last year in The Yard building, right next to the hugely popular Burnside Bridge Skatepark. Fittingly, it’s kitted out with cool skater décor, including a concrete skate pipe surrounding the bar.

Vegans and vegetarians have plenty of options in the neighborhood too. Joining the eastside location of Prasad, which has been filling the vegan niche for several years, is the nearby Rabbits Café, from the team behind vegan Indian spot The Sudra. This spinoff of the popular Downtown spot offers hearty bowl and salads bursting with veggies with hemp milk milkshakes, smoothies or kombucha floats to wash them down. And the Pear Juice Bar and Thai Veg Café serves up cold-pressed juices and smoothies, tea lattes with beet or turmeric, and a wide selection of healthy salads and bowls built on Thai flavors.

The food in the ‘hood isn’t all fast-casual though. Meridian 7 opened this past spring in the Fair-Haired Dumbell building, bringing Cuban and Caribbean food and drinks for sit-down lunch or dinner. And nearby the chic Normandie cocktail den, which opened in summer 2018, offers an eclectic selection of bar snacks, like croque madame beignets alongside seafood-centric entrees.

For a quick bite to go with a glass of wine, there’s two-year-old, Iberian-inflected Bar Botellón serving Spanish varietal wines, even Spanish cider, on tap and small selection of tapas (free during happy hour) and tinned fish to go with them. For a taste of Portland’s groundbreaking artisan distillery scene, there’s Wild Roots’ new tasting room, which opened in early spring 2019. Taste through the company’s juicy fruit vodkas, or order mini $5 cocktails and frozen boozy slushies.

Beloved punk dive bar B-Side Tavern reopened spring 2019 after a fire shut it down last fall. And the team behind Sizzle Pie launched Bar Dune next door in November 2019. The dessert-inspired bar (with a hint of sci-fi) will focus on agave spirits, as well as zero-proof and low-proof drinks, alongside vegetable-heavy bowls and small plates topped with alternative proteins (aka grasshoppers).

There’s more to lower East Burnside than eating and drinking of course. In addition to the boutiques and vintage clothing shops that have populated the area for years, there’s a few new spots too. The ultra-chic Danish outerwear company Rains recently opened its boutique, just the second in the country next to NYC. And notebook junkies will love 11:11 Supply, which focuses on tools and supplies to keep your life organized and on track. Just don’t forget to pencil in an appointment to Knot Springs. The eastside outpost of the popular westside wellness center offers massage, facials and group classes, as well as saunas, steam rooms and plunging pools.

A Wave of Restaurant Openings in the Northwest Alphabet District

The New Brews of Portland

Portland Zeroes in on Zero-Proof Drinks