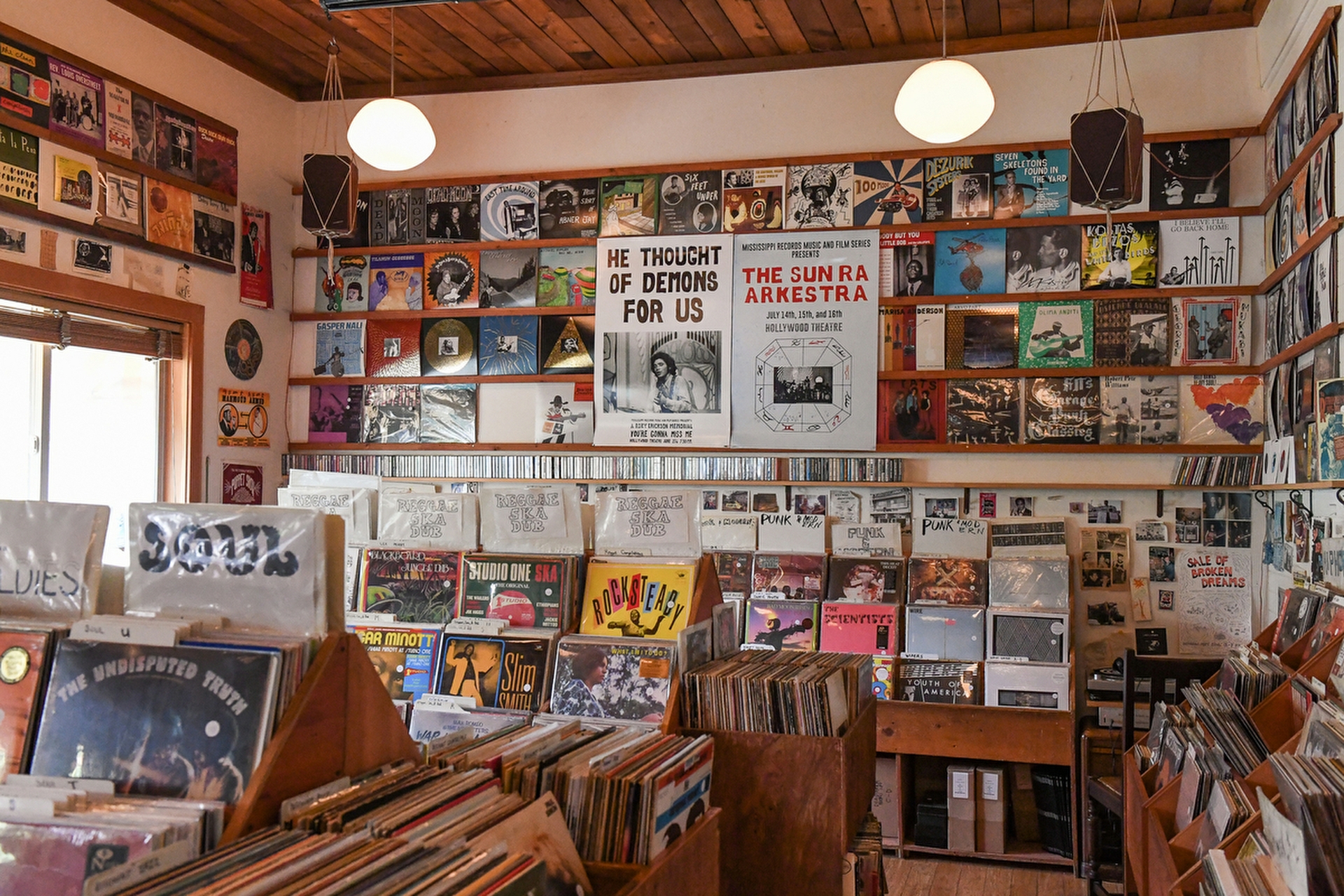 Often referred to as The Fifth Quadrant, Northeast Portland is home to some of the best and most bustling streets in town. Specifically, N. Albina Avenue and N. Mississippi Avenue have seen tremendous change in recent decades. Beneath the growth and gentrification of these historically Black neighborhoods lies a story from Portland’s past and perhaps a glimpse at its future.

Creator Megan Hattie Stahl was taking a class as part of her MFA program in which she needed to create something to submit for her final project, and came up with the idea for The Albina Soul Walk. Inspired by previous audio walking tours and the history of Portland, she decided creating one to highlight Portland’s jazz and soul history in NE Portland was one imperative way to share Portland’s past. She collaborated with many Portland locals for the project, with Bobby Smith from the Albina Music Trust taking care of the music curation and oral history direction.

According to their website, “The late 20th century was a vibrant time for music in Albina. From the roots of gospel, blues, and jazz sprang new forms of soul, funk, disco, and electrified R&B. Teenagers and elders alike fused genres to create new sounds in church. Musicians spent afternoons and after hours hopping from jam session to jam session. And residents dressed to the nines, hitting the clubs every night of the week. Over time, however, this rich musical culture was immobilized by redlining, community disinvestment, and gentrification. Black musicians experienced racism in the city's club circuit, restricting access to capital and recognition outside of Albina. Though music in the neighborhood was alive and well, record labels largely ignored Albina musicians and few albums were produced in their time.”

The audio tour is narrated by seminal Portland jazz musicians Calvin Walker and Norman Sylvester, as well as contributions from former Cotton Club owner Paul Knauls Sr., as they walk you through former community hang-out spots, businesses, music venues and landmarks during the 1960s-1980s. “There is a certain kind of experience you could have when visiting a place, but it doesn’t always jump out at you...you have to dig for it. I would be sad to think about tourists visiting Portland and not knowing the history behind some of our greatest neighborhoods. I think it’s possible to both embrace history and enjoy dinner somewhere” said Stahl. “Calvin Walker often said to me when we were working on this project, ‘you need to ask why this stuff isn’t here anymore. Otherwise, you are missing the point of this entirely.’”

While not technically on Albina or Mississippi (it’s located on N Tillamook St.), Billy Webb Elks Lodge is also a crucial part of the North Portland community. Recognized as a part of The Albina Soul Walk, it has made its way onto the National Register of Historic places due to the lodge’s impact and role in Portland’s Black community. For the past six years, Louis McLemore has held the title of Lodge Exalted Ruler. In the 1940s and 1950s, the lodge served many purposes. It was the headquarters for the Portland Branch of the NAACP, it was a recreation center of Black servicemen during World War ll, an emergency shelter during the Vanport Flood and as the African American branch of the YWCA. Since then it has been a hub for community events like block parties, pop-up markets and a vaccination site. Unfortunately, the lodge was greatly impacted and suffered major damage earlier this year because of a fire, and hopes to reopen again sometime in 2022 with the help of fundraising within the community.

For additional resources about the history of Northeast Portland:

With factors such as gentrification, infrastructure changes, economic and political factors and the ongoing pandemic, Albina and Mississippi Avenue have clearly experienced radical changes in terms of what kind of businesses remain and how the opening of newer business in the last several years have transformed the neighborhood. While so many older staples that were once the backbone of the area may be gone, there are still many community-minded businesses to explore and discover.

Southern Kitchen is a Black-owned food cart that opened on N Mississippi in 2019, and one of the only remaining black-owned businesses on Mississippi. Co-owners Jermaine Atherton and Maurice Fain sought to bring a taste of Southern comfort to Portland by offering menu items such as: catfish, ribs, black-eyed peas, red beans and rice, collard greens, fried okra, hush puppies and more. Inspired by his upbringing in Georgia, Maurice pays homage to both his grandmother and her recipes as well as his Haitian heritage at Southern Kitchen. They offer catering, live music events in their seating area and workshops for folks in the community geared toward entrepreneurship and cooking.

The Rebuilding Center is a climate justice nonprofit organization that helps renew and rebuild things such as windows, doors, appliances, and cabinets using donated and repurposed materials. They offer classes in order to help empower students to learn and develop practical skills in carpentry, plumbing and basic electrical knowledge. While not an obvious stop for out-of-town visitors, it’s worth popping in to get inspired by the creative projects and community-minded ethos here. Browse their 30,000 square foot warehouse for any miscellaneous or specific items, and spot the steady stream of donations y in their alleyway drop-off spot.

Just a few blocks away from the Rebuilding Center you’ll find Sunlan Lighting, a lighting and light bulb store offering an extremely wide variety of choices and endless rows of interesting fluorescent, LED and Christmas lights and fixtures. It is also the oldest remaining business on Mississippi Ave, which opened in 1998 by Kay Newell, aka “The Light Bulb Lady.” Sunlan is still operated by Kay and her son Dennis, and they have been serving the community and helping people by way of lighting their lives for every occasion.

If you’re looking for coffee nearby, there’s The Fresh Pot which has been around since 1997, as well as Fly Awake Teahouse for tea and baked goods. Later on, catch a local show and a burger at Mississippi Studios and Bar Bar. It’s also worth noting that while you can’t exactly visit to hang out, Portland’s radio station XRAY-FM is located on Albina inside The Falcon Art Community building, and they participate in events within the community, feature programs by local DJS and musicians, and often collaborate with Mississippi Studios for shows.

Mississippi Records is a record store on Albina that has been around since 2003. It was founded by Eric Isaacson, who has always believed in putting the community at the heart of the shop. Mississippi Records is a label based in Chicago, where Mississippi Records ships all their releases from. Though the neighborhood has undergone so much change, Mississippi Records has kept most of their original practices the same- including their pricing, shipping, being cash only, and continuing to offer a wide and robust selection of music that ranges from jazz, soul, folk, blues, gospel, and more. Along with selling records, they also distribute cassette tapes and collaborate for community events like film showings, lecture tours and regular tours for Mississippi Records artists.

After browsing for records, be sure to stop by Sweedeedee restaurant for a sandwich or slice of pie and produce/natural groceries from Cherry Sprout Produce. Also on the same block is The Red Fox Bar, a bar that opened in 2008 that often hosts film screenings, basketball game viewing, maker’s markets and of course a full food menu and specialty cocktails and drinks. If you’re in need of a second cup of good coffee, walk a little further down to The Albina Press.

The Mississippi and Albina neighborhood was once a pillar of Portland’s 1960s jazz scene and Black community. While much has changed, the business owners of the area today remain community-minded and deeply tied to music via record shops, radio stations and live music.